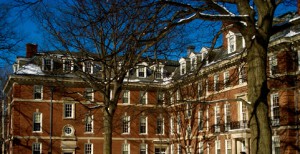 Want to know more about our residences for first-year students? Read on!

For the 2021-2022 academic year, Williams, Sage, and Lehman form the Frosh Quad (which is great on warm days for Frisbee, studying at one of the picnic tables, or hanging out in the sun). 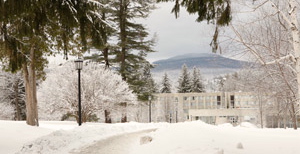 Mission Park is made up of four sections, each of which has horizontal entries. We’ll be the first to admit that Mission is a funny looking building (winner of an architectural award my foot) – but first-years who live there have no complaints. The rooms in Mission Park are situated in funny little zig-zag angled ways.

Mission Park takes its name from the part of campus where, in 1806, five Williams students gathered in the then-maple grove on a warm summer day to discuss their interest in spreading Christianity. When a sudden lightning storm interrupted their discussion, they took shelter in a nearby haystack (check out the Haystack Monument on your way to the building!), huddling and praying for foreign missionaries. Although not praying, ironically, to be hiding under something less flammable than a stack of hay…

Please note that some rooms may not appear, and some former common rooms may now be student rooms.

Please visit the Covid-19 website for the latest information, including details about vaccination, testing and mask requirements, and policies for off-campus visitors.

No events are listed.